If you read my wedding recap blog, you might have seen that we didn’t ask for gifts. Trav and I truly didn’t want any gifts but as tradition goes, many people still gave us gifts. Most commonly in the form of nice wine. One of the greatest gifts was a week-long stay at Trav’s Aunt and Uncle’s timeshare. We could go anywhere in the continental US for an entire week. Trav and I toyed around with the idea of South Carolina or Tennessee but finally decided on going to Lake Tahoe. 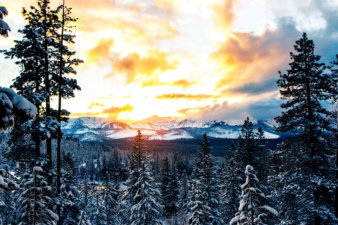 We chose a vacation in Lake Tahoe for many reasons.

One of those reasons being that we could drive. The airfare to South Carolina or Tennessee wasn’t crazy expensive but when you multiply that by 3, add bags, a rental car, etc, it adds up. Lake Tahoe from Orange County is about an 8 hour drive. Not awful but with a toddler, not ideal. If you’re going on a road trip with a toddler, check out how we survived a road trip with a toddler. I do think driving has its perks. The road trip is half the excitement, it’s easier on the bank account, and you can pack as much crap as your little heart desires.

The hotel we stayed at was absolutely awesome.

Even though it’s a timeshare, you can still stay there as a guest. We stayed at The Ridge Tahoe and their nightly rates are pretty reasonable. Their reviews on TripAdvisor.com aren’t the greatest but we had a fantastic time – let me explain. We were originally booked in a hotel room in the Plaza Tower but we upgraded to a 1 bedroom condo in the Cascade Tower. The 1 bedroom condo came with a big kitchen, a huge bathroom, and a living room. Since we were staying in Tahoe for a week, those were all necessities. The first night we were there, we went to the store and stocked up on everything we were going to eat for the week. This cut down on the cost of eating out every meal tremendously. I think we only went out to dinner once and lunch a handful of times.

What we did while we were there:

The first day we took Cash sledding – just went to the nearby board shop, grabbed a $12 sled and drove around until we found a hill. Cash had a blast and I have the bruises to prove it. In the welcome packet at the hotel, it showed all the activities the hotel had to offer. They had things like family movie night, a huge gym, indoor saunas and steam rooms, a nice spa to get massages and facials, and a game room. During the warmer months, they have pools on the roof, playgrounds, mini golf, golf, and tennis courts. Lake Tahoe is one of those awesome places year round. During the winter its packed with indoor activities and in the summer it’s all about being outdoors. 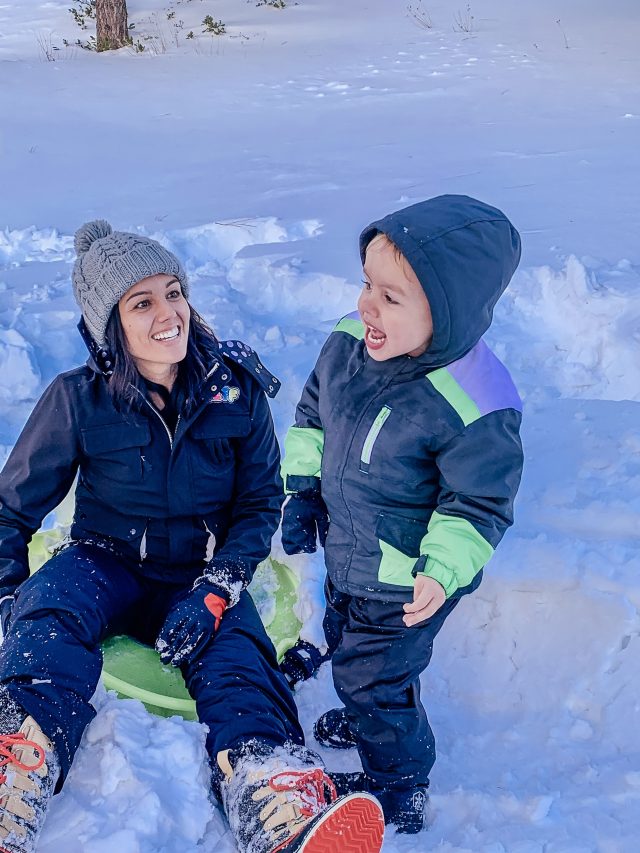 One of the days Trav had to work so I went on an adventure with Cash. We found an arcade at Harvey’s Casino in South Lake Tahoe. I don’t know about other parent’s but every time we go on vacation, Cash loves the arcade. We could see the most amazing attractions and he would say his favorite part was the arcade! Anyways, this arcade is the bomb.com. They still use tokens and the machines still shell out tickets. There are probably 75 games to play and if you put in $20 the kids get 88 tokens. We did $20 and were there for about 2 hours. 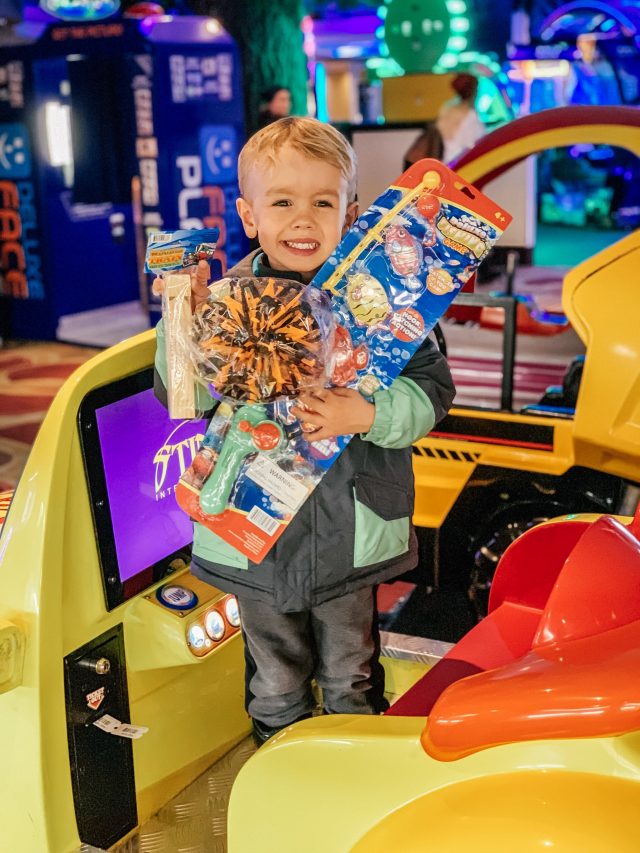 At The Ridge Tahoe, they also have a kids club which Cash loved. After the arcade we went to check it out and they were just about to start a craft so we stayed and made some beaded thing. We ended up taking Cash back a few more times so that he could make play doh and play with other kids. They only allow you to drop your kids off for 1.5 – 2 hours so while Cash had fun Trav and I went to the gym or just stayed with him and made crafts ourselves.

The last memorable thing we did was go snowboarding.

I had heard great things about the kids ski school at the Heavenly California Lodge. It was approximately $235 per child for a full day. That included the rentals, the instruction, lunch, cookies and hot chocolate, and a photo. By the time Trav and I got settled with our lift tickets, we went back to check on Cash around 10am and he was already getting the hang of skiing and loving it. Like, he didn’t even pause to say hi to us. By 2pm he was going through the “car wash” poles and not falling down at all. Our snowboarding day was definitely the most expensive day but totally worth it. Seeing Cash crush it on the slopes was priceless. He did so well that we took him down the “First Run” and he kept telling Trav to stop slowing him down! 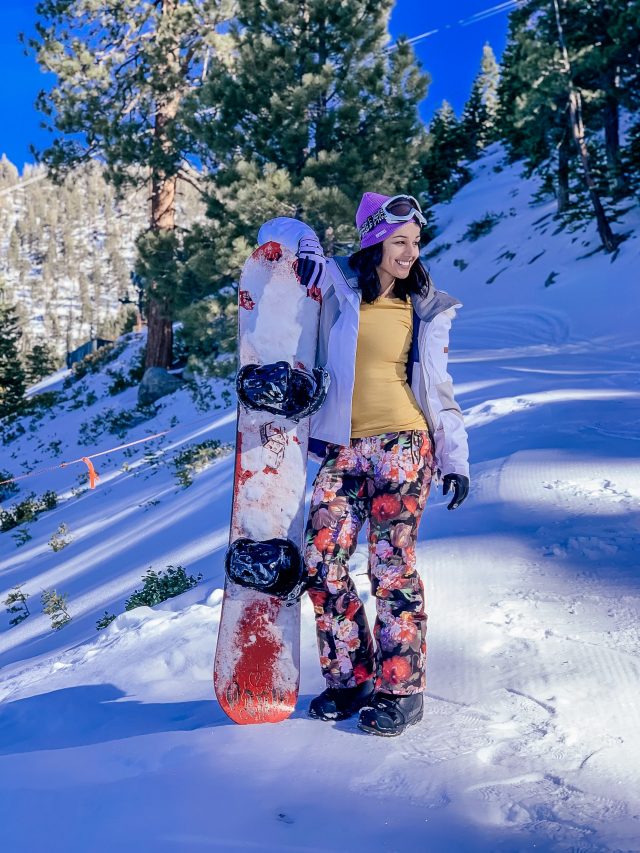 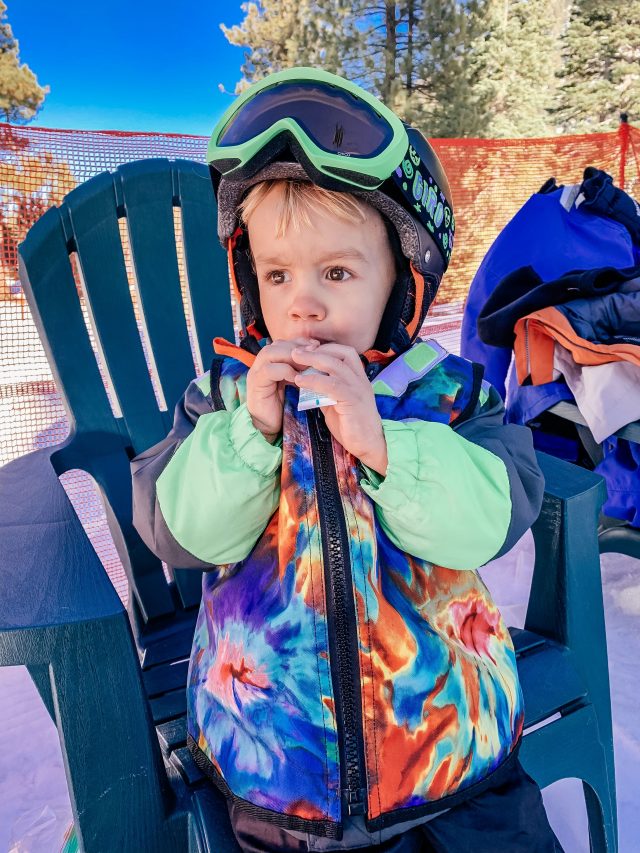 Where to Eat in Lake Tahoe

The food at the hotel was cafe food at best but the food around town was so good! Something about the freezing cold and the snow had me craving a Bloody Mary. While Trav was out with Cash he saw this little restaurant near the hotel called the Fox & Hound Smokehouse Grill & Bar. They had delicious Bloody Mary’s, fried pickles, and the best chili I’ve ever tasted. 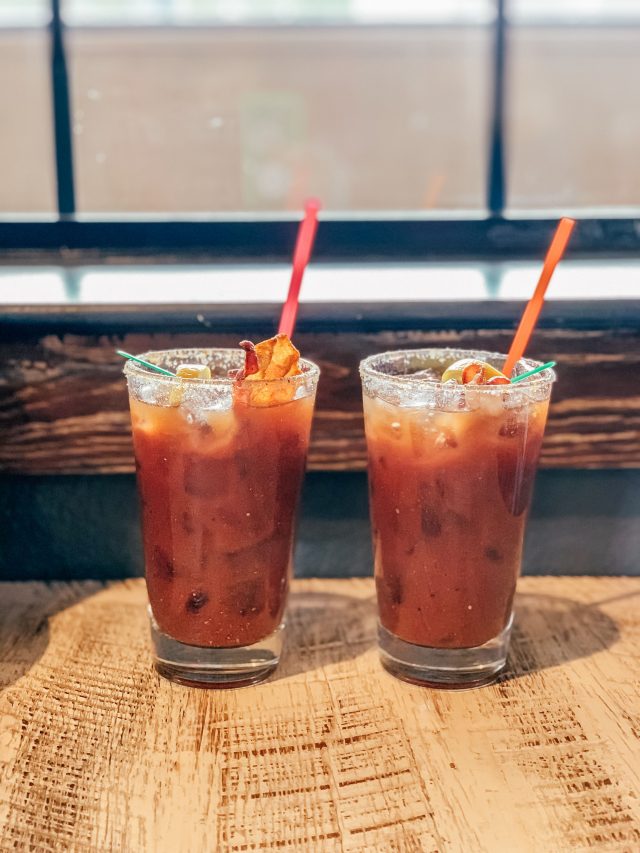 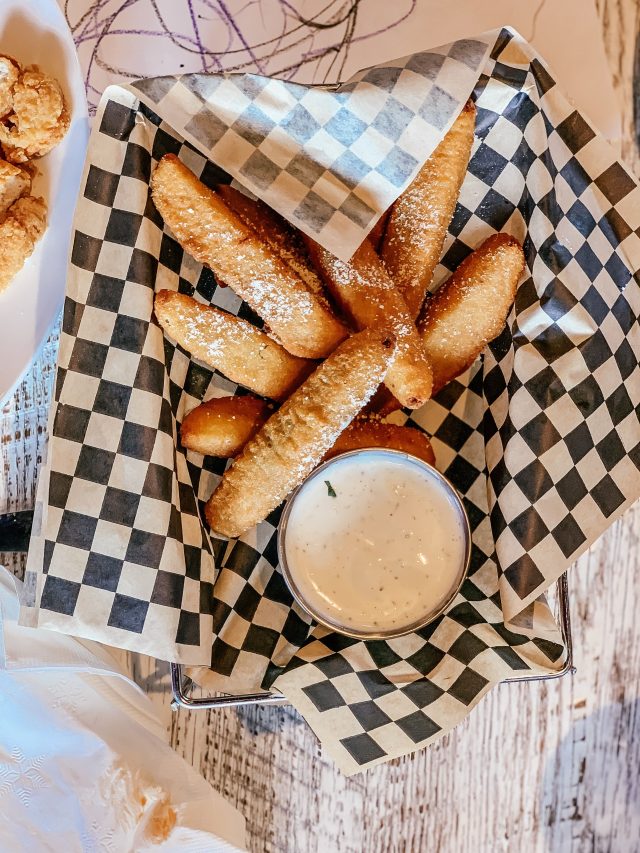 Another really good place was Gunbarrel Tavern & Eatery inside Heavenly Village. We initially went to Heavenly Village to go ice skating (which wasn’t worth it) but ate at Gunbarrel Tavern & Eatery. They had lots of tavern type food like yummy lobster mac & cheese, chicken wings, Brussels sprouts, etc. A huge plus was that they had Blantons by the glass for $12 – Trav was a happy man!

We still need to do something special for Trav’s Aunt and Uncle to say thank you for such a wonderful gift. What are some creative ways to say thank you? Let me know in the comments! 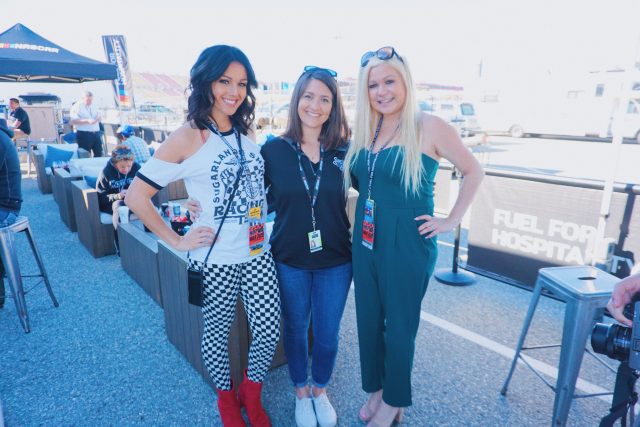 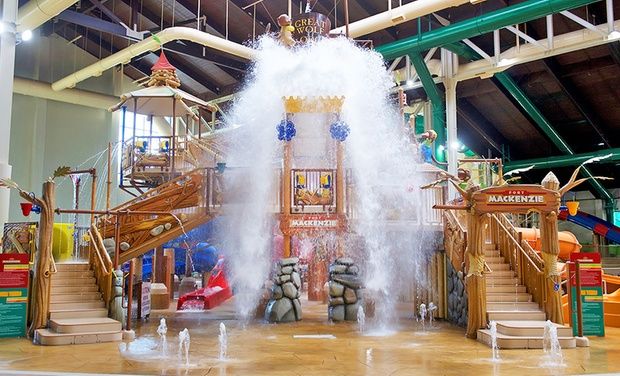 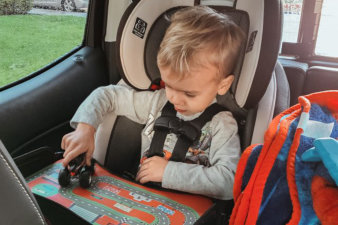